Guy Fawkes night this year was outdone in terms of noise on the following Friday, November 7th., when the STL Chapter of the Harlow Quarter Century Club held their annual buffet dinner in The Gallery at the Nortel London Road Campus – “The Labs”.

The blue touch paper was literally ignited when one hundred and eighty members met to exchange news and renew old work associations. The evening could well be said to go with a bang!

The President, Brian Edwards, welcomed members, especially Sir David Brown, who served in the Technical Directorate and lately Motorola, and Dave Smith, the President of the Components Chapter. Sixteen new members were presented with their badges including Kim Burns, who had served for twenty-five years almost to the day, and a number of members were returning after breaks in attendance. He said that he was pleased to see that our numbers continued to increase and that, as the New Southgate, Transmission, Components and Southampton chapters still met regularly the Quarter Century Club was still very active.

Brian told members that, as always, the function had been made possible by the courtesy of Nortel who were again allowing the use of The Gallery and by a dedicated band of helpers who made all the necessary arrangements. He made special mention of Chris Tarry who had provided all the signage and Fred Howett, the Webmaster. He also gave a brief update on the pension scheme before handing over to the Vice President, Gordon Harris.

Gordon responded to the toast of “The Quarter Century Club” on behalf of the members. He presented Paul Hillyard with a cheque for the charities Mercy Corps, Hope and Homes for Children and the Great Ormond Street Hospital for which he had recently competed in the Mongol Rally from London’s Hyde Park to Ulan Bator and raising nearly £5000. The cheque was presented in a model car filled with sweets ready for his next venture. Gordon said the car reminded him of that owned by Cyril Drake which was fondly remembered by many members.

He went on to advise members that they now had a TV star amongst their number – Chris Greenhill who had recently appeared in “Flog It” selling a Victorian wooden kneehole desk for £1600 on behalf of the Rainbow Services charity of which he is Chairperson. Gordon then asked Chris his expert opinion on the value of his own wooden woodworking jack plane which he claimed was also of Victorian date.

Gordon then presented Arthur and Jacky Needs with a gift to mark their Golden Wedding anniversary and Arthur’s eightieth birthday. He also thanked Vi Maile for her hard work in organising the evening.

Members were then treated to a demonstration by a team from Science Alive! Led by Stan Allen. This is an organisation formed to raise awareness and interest in science by schoolchildren. Volunteers with a science background are always needed. Stan deftly demonstrated the effects of atmospheric pressure and the Bernoulli effect utilising an array of vacuum cleaners to the great amusement of members.

There followed much animated conversation amongst members and, with the drawing of the raffle, another very successful event drew to a close. 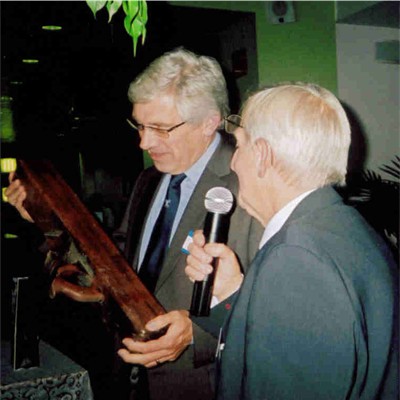 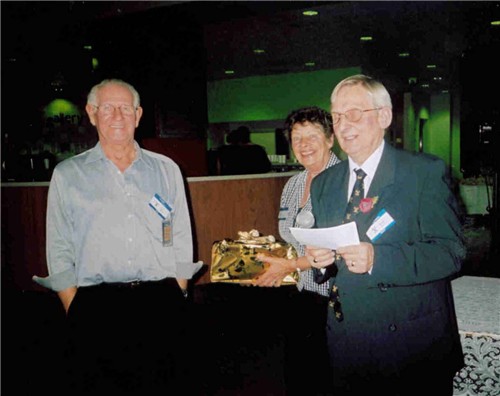 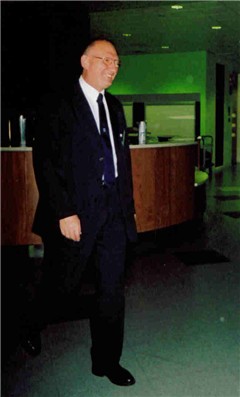 Roy Ham about to receive his QCC badge 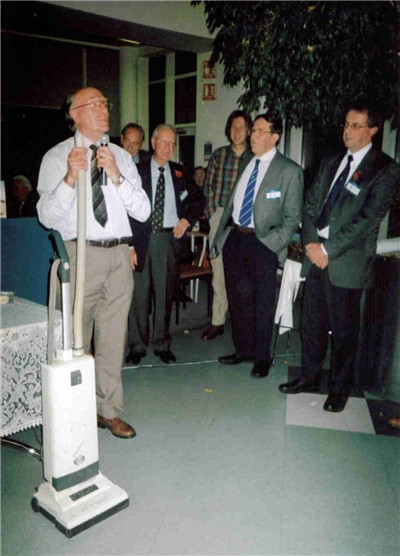 Stan Allen about to entertain us with his vacuum cleaner!