It all probably started at the end of 1997 when Nortel hosted an awards ceremony at Bletchley Park for their UK inventors whose patents had been granted the previous year.

At this time a team at Bletchley Park led by John Harper were finalising their researches and plans to rebuild a Turing Bombe, the electro-mechanical machine designed to assist the code breakers in cracking the Enigma codes being used by the enemy to encrypt their communications. Conceived by Alan Turing and Gordon Welchman at Bletchley Park, and named after an earlier but quite different machine built by Polish cryptographers, it helped the code breakers to read the Enigma traffic, sometimes before the enemy for which it was destined. It is said that the work at Bletchley Park helped to shorten the war by a number of years.

Alan Turing was a mathematical genius whose work on the theory of computing has now earned him the title of father of the modern computer. Whilst his name is now associated with the Bombe great credit is due to the team at the British Tabulating Machine (BTM) company led by Harold “Doc” Keen who realised Turing’s ideas using the technology available to them at the time. He created an electro-mechanical machine drawing heavily upon the components used in punched-card equipment, but with its own unique mechanical and electrical architecture. BTM was to become part of International Computers Limited (ICL) which in turn would eventually become part of Standard Telephones and Cables Limited (STC).

Allan Fox, at that time Managing Director of the Nortel Advanced Technology Centre at Harlow – STL as we still know it – arranged for Nortel to become a major sponsor of the project with an initial financial boost of £15,000 and later support in other ways.

The first steel for the frame of the Bombe rebuild had been cut in the February of 1997 and the completed frame was formally delivered to Bletchley Park in the September.

The STL Model Shop was soon tasked with the manufacture of support panels and other items. Meanwhile Vi Maile was asked to assemble a team of retired employees whose tasks were initially to reproduce original blueprints to be transferred into computer aided design (CAD) format and subsequently to manufacture piece parts, to manufacture cable harnesses and to carry out much of the wiring. The company supported these activities by making available, firstly, a basement area where a large cable forming table could be set up and, latterly, a workshop where the team could carry out a multiplicity of moulding, soldering and assembly tasks.

Chris Carter and Chris Tarry led the cable forming activity and Mike Hillyard planned and managed the mechanical tasks. A Roll of Honour at Bletchley Park records the names, many from STL, of all who contributed to the rebuild. 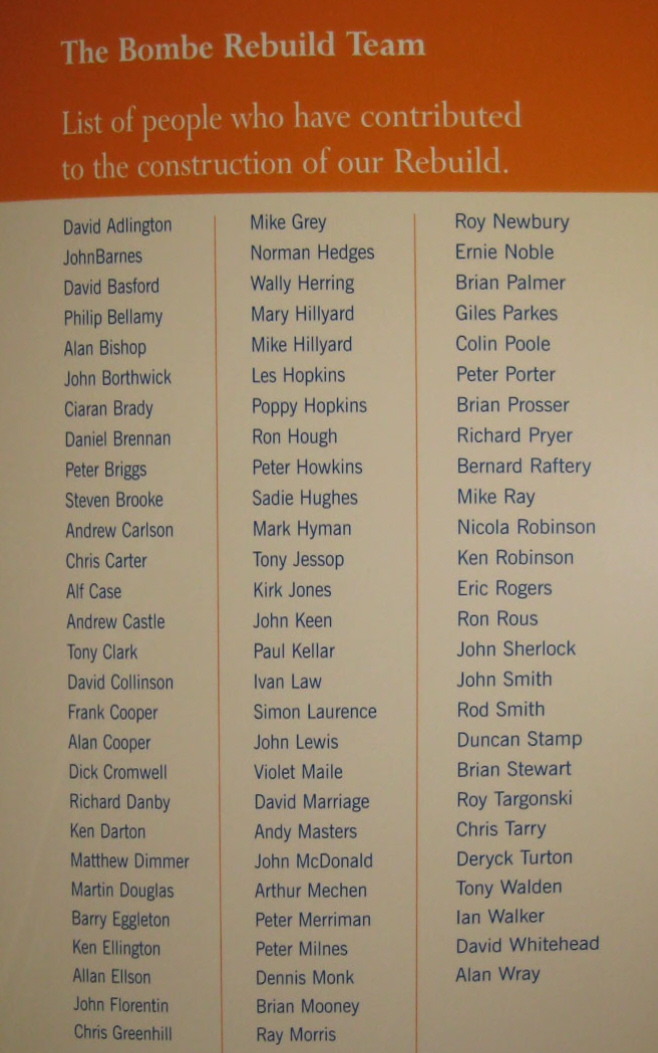 This work was done in the basement of the Conference Centre, sometimes on hands and knees, on a custom made 14 foot table.

Initially, the mechanical tasks undertaken by STL volunteers were limited to drilling holes and tapping threads, but with the availability of home workshop facilities within the STL team,this was quickly extended to the preparation of precision jigs enabling production runs of more complex parts by volunteers working at home. STL volunteers also produced a significant proportion of the precision parts including the main shaft bearings. The volunteers worked in a variety of materials including steel, brass , tufnol and nylon. Rivetting using a toggle press became an STL team speciality and all of the Bombe’s rivets were closed in this way.
Mike Hillyard kept records of the mechanical tasks undertaken. This consisted of simple “one-liners”, for example:
MAKE BRUSHES for 198 drums = 20,592 off
By 2007 this document had stretched to 23 pages.

Some of the statistics of these tasks are staggering. As one example the assembly, wiring, alignment and grinding of 214 translator drums comprising 11,128 wires and 22,256 tags, 22,256 brushes, brush posts, grub screws, washers and 44,512 nuts! Eventually twelve miles of wire would be assembled into cableforms.

In April 2002 the assembly and commissioning of the main mechanical assemblies was completed and the rebuild was placed on view and also run for privileged visitors. WRNS who had operated the machines during the war when returning to Bletchley Park were said to have become very nostalgic on hearing the familiar sounds again after a period of over fifty years.

Work continued on the final completion of the Bombe until, on 6th. September 2006 a grand unveiling was carried out in front of an impressive array of notables together with the world media. Commissioning and adjustment of the machine continued throughout 2007 and a formal “switch-on” was carried out by the Duke of Kent on July 7th.

Over the years since there have been other visits paid by royalty, Bletchley Park veterans and notable figures in the scientific community.

Since 2007 a small team has concentrated on the fine adjustment of the Bombe so that it now operates just as did its predecessors which carried out the notable achievements during hostilities. The related displays have been developed by the team to provide a suitable environment for the machine and this includes a display of the jigs, test equipment and manufacturing artefacts associated with the build. The rebuild is now a major attraction on view at Bletchley Park which itself is a popular tourist venue.

During 2012 a joint activity between the Bombe Rebuild Team, Bletchley Park and GCHQ has seen a “challenge” in operation which has realistically re-created a test of the process by which Enigma traffic was intercepted by BP during WWII and the Enigma “settings of the day” discovered and used to read all the traffic that day. The Bombe remains the “star” of this operation and STL volunteers continue to be actively involved in the work.

The Petard is now an important exhibit in its own right at Bletchley Park. It is a reduced version of a Bombe, simulating four Enigmas compared to the Bombe’s 36. The mechanics of the Petard were assembled before the Bombe was built, in order to check that the parts would all fit together and operate correctly. This was necessary because whereas diagrams for many of the Bombe’s parts were available, there was no overall assembly diagram for the Bombe.

When the Bombe rebuild was completed, the Petard was then equipped with cabling to provide limited electrical functionality and is now controlled by modern electronics, so that it can be operated by members of the public without the need for demonstrators to be present.

STL Volunteer Mike Hillyard is an enthusiastic stereoscopic (3D) photographer. He recorded the building of the Bombe over several years on various 3D cameras and in 2006, with StereoscopicSociety President Bob Aldridge, made a 3D audio visual show describing the rebuild. This was shown at the International Stereoscopic Union’s Congress in Boise Idaho, and well received. Simon Greenish, then BP Museum Director, saw the show and asked if it was possible to have it as a display at BP, and offered funding
With the help of his son Paul, another ex-STL emplyee, Mike set about building a 3D theatre to run the show on demand for visitors in a small theatre for up to 10 people at a sitting. Mike built the projection rig and the electronics whilst Paul wrote a comprehensive control software package.
The theatre opened in early 2009 and remains a very popular attraction with between 10 and 30 showings daily dependent on visitor numbers. 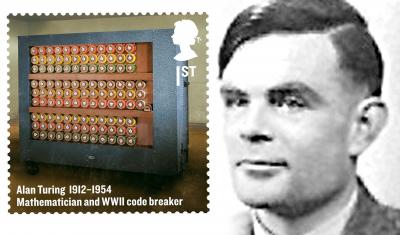 In June 2012, the centenary of the birth of Alan Turing, an exhibition devoted to his life and work was staged at Bletchley park and his achievements have been celebrated on a stamp in the “Britons of Distinction” series which features a picture of the actual Bombe rebuild.

In 2007 Sarah Fabergé, great-grand-daughter of Russian Imperial Jeweller Carl Fabergé, has created the Enigma Pendant in tribute to the codebreakers at Bletchley Park and to celebrate the achievements of all those associated with breaking the Enigma messages throughout the war. In the tradition of the Fabergé family, the pendant holds a surprise – a miniature of the Enigma rotors, handmade and revolving to display their numbers.

was presented to Vi Maile at the 2007 QCC dinner in appreciation of her contributions to the QCC over many years and also in recognition of her role in the Bombe rebuild.

This article consists of inputs provided by Vi Maile, Mike Hillyard, and Chris Tarry. The role of honour photo was provided by Colin Marr