The STC Mobile Radio Division was formed in 1968 mainly from engineers in the Airborne Communications department of the STC Radio Division. The objective was to become a major supplier in the growing UK market for private mobile communications.

The product range that was developed was called the STAR system (Standard Telephones Advanced Radio). The first products were a UHF mobile and base station and a remote control unit. This was followed by a Portable UHF radio handset known as the Starphone, and subsequently augmented by AM and FM versions operating in the VHF bands. The Industrial design for the product range was carried out by Kenneth Grange Associates, famous for the Kenwood Chef food mixers and the Inter-city HS125 trains.
The Starphone won a Council of Industrial Design award in 1970.

The initial products, the UHF mobile and base stations were the first UHF products to gain type approval in the UK (possibly in Europe). My recollection is that the product development was extremely rapid – 18 months from initial concept to type approval. The products were entirely solid state and used no relays in the mobile, base station, or remote control unit – this was another UK first. 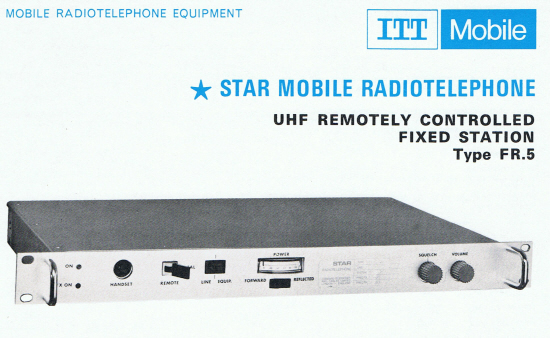 The Stock Exchange System was particularly interesting from an engineering viewpoint in that it was designed to provide full radio coverage inside the new building using a radiating cable (leaky feeder) antenna system. Extensive measurements and trials in the old Stock Exchange building had proved the feasibility of employing such a technique.

The new Stock Exchange building was opened by the Queen in 1972, and many people will recall seeing tv pictures of jobbers on the market floor communicating with their offices using Starphones instead of the traditional wired telephones.

The new building had had the radiating cables incorporated into the fabric of the building during its construction. A single loop was buried in the ceiling of the market-trading hall, and additional cables were built into the lift shafts to provide total radio coverage throughout all twenty-six floors.

The radio base stations were housed in racks located in a corner of the Stock Exchange’s large PABX situated in a sub-basement of the building. The system comprised 32 UHF base stations operating on 32 adjacent channels feeding the single complex antenna system. The outputs of the base station transmitters were combined using a system of circulators and cascading hybrids to provide the necessary isolation between transmitters so as to keep the intermodulation products to an acceptable level. The base station receivers were fed by a series of Wilkinson splitters.