My First Flight From Stansted – by Fred Howett

When I joined STC in 1964 I started work in the Radio Division based at New Southgate in North London. Initially I was in the Airborne Communications Group, but in 1967 I was seconded to the Airborne Navigation Group along with fellow engineer Graham Pye and our team leader Tony Pitkin to work on a new generation of Instrument Landing System (ILS). Our task was to design the new marker beacon. A new antenna had been designed which was potentially much more efficient, permitting significantly reduced installation, operating, and maintenance costs. Our new design could be powered, monitored and controlled over a single telephone line obviating the need for a mains power supply at the antenna site. However the new antenna design had yet to be tested in practice. A flight test was needed. 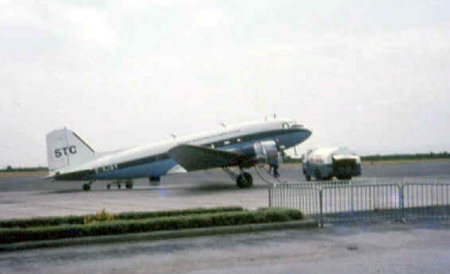 In the 1960s, STC operated its own aircraft, a Douglas Dakota DC3, based at Stansted in Essex. This was used to ferry VIPs from ITT between London and Brussels, to transport employees of the year to the ITT ranch in Spain, and also as a flying testbed for the communication and navigation products developed by the Radio Division. Although the aircraft was a pre-war design in a jet plane age, it was one of the most luxurious and well equipped aircraft then flying.

And so one sunny morning in the summer of 1967, Tony, Graham, and myself drove out to Stansted airport to carry out flight tests of the new marker beacon antenna. The plan was simple; firstly to calibrate the onboard marker receiver; secondly to erect the prototype antenna and test transmitter at a suitable position along the glide path: thirdly to fly over the marker beacon at different heights and different offsets from the runway centre line and monitor the times the signal threshold of the onboard marker beacon receiver was exceeded for each dummy approach. 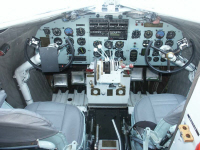 After a while we received a radio message in the aircraft that the antenna was erected and testing could commence. We were just about to start our first approach when we received a message in the aircraft that the antenna had been incorrectly oriented and there would be a few minutes delay while the antenna was rotated 90 degrees! Eventually we carried out a comprehensive set of tests. During this testing, I was in the cockpit, standing behind the Captain with a stopwatch in one hand and a notebook in the other. Some of the test approaches seemed so low to me that I felt sure we were brushing the tree tops – not a bad way to take my first ever flight! Graham Pye told me later that it was also very scary on the ground at the test antenna site. Tests completed, the antenna was dismantled, I was picked up by Tony and Graham and as it was too late to get back to New Southgate for lunch we found a local pub and enjoyed a well earned pint and a ploughmans lunch.

Since then I have flown many times from Stansted and can honestly say that none of the subsequent flights were as enjoyable, exciting or scary as on that first occasion.

I recently discovered that the old STC Dakota is still flying (in 2009). Scroll down for more information on the history of this aircraft.

The flight tests were successful and proved the efficiency of the new antenna design so the approval was given for the development of a complete new marker beacon system – the STAN39. This, together with the STAN37 Localiser transmitter and STAN38 Glide Slope transmitter provided a complete ILS (Instrument Landing System) capable of supporting completely automatic aircraft take-offs and landings.

The novel antenna design enabled the system to meet the required standards with less than one watt of radiated R.F. power. This in turn allowed the entire marker beacon to be powered over a standard telephone line using just 50 mA at 75 volts (this was the maximum allowed by the GPO for their telephone lines). The transmitter was entirely solid state and used some first generation logic integrated circuits to produce the different morse codes required for the inner, middle and outer marker beacons.

Two complete marker beacon transmitters and a monitor unit were housed in a small weatherproof box which was directly mounted to the antenna pole. The transmitters could be selected remotely from the control unit, or switched automatically in case of a transmitter failure detected by the off-air monitor. An optional battery box could also be directly mounted on th pole and provided sufficient power for one weeks operation.

The first installation was at Luton Airport. As far as I can recall, the system worked perfectly. The only issue of note was when the remote control unit lost control after the telephone line was struck by lightning. This required a service visit to replace the surge protection fuses.

Another first for STC was the world’s first nuclear powered marker beacon. 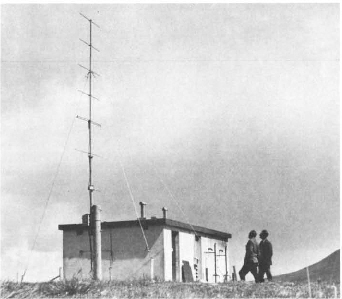 Because of the extremely low power requirement of the new design (under 5 watts) it became possible to power the beacon from a small nuclear pile. This consisted of low level radioactive isotope material sealed in a container which also housed a series of thermocouples. Such a device was expected to power the beacon for a minimum of five years. This was particularly useful for remote installations with no access to local facilities such as mains electricity or telephone lines, or even roads. The first installation was the outer marker beacon at Benbecular in the Hebrides where the nuclear battery replaced the existing diesel generator.

History of the STC Dakota

This aircraft was completed in May 1944 and transferred to the British Royal Air Force where amongst other tasks she towed gliders during the Arnhem Landings and in “Operation Varsity” the airborne crossing of the Rhine when she towed Airspeed Horsa gliders.

In June 1946 the aircraft was transferred to the Canadian Airforce where she remained until August 1958. After short spells with several other companies she was bought by ITT in October 1962 and transferred to STC in the UK in November 1962. She remained in the UK primarily as a flying avionics test bed for STC’s Radio Division until September 1971.

Since then, she has spent most of her time working for numerous South African companies. In June 2002 she was purchased by Rovos Rail, given an extensive overhaul and refurbishment, and now provides luxury South African Air Surfaris. For more information please check the Rovos Air web site. 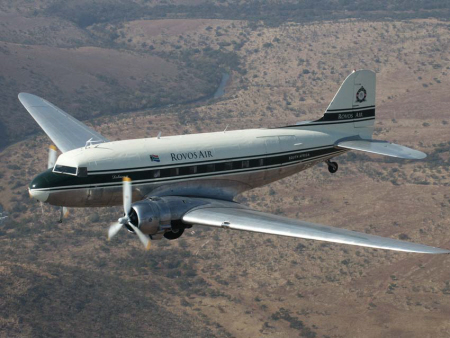 The old STC Dakota in her latest Rovos Air livery.

For more photographs, go to http://www.airliners.net/ and key the registration numbers (G-AJRY, ZS-PTG) into the photo search facility.